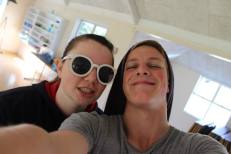 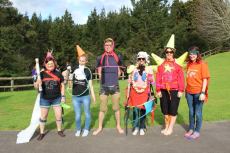 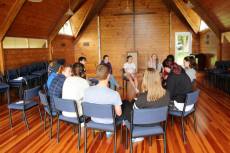 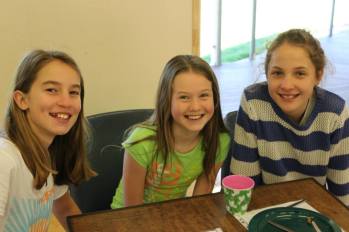 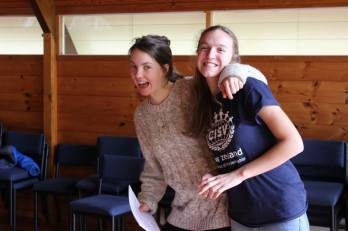 Everybody came to minicamp excited and looking forward to another minicamp and seeing all their friends again. The moment we got there, we were all welcomed by hugs and smiles and we dropped our things off in our cabins as we got prepared for the first activity of the weekend.

The first activities (as all first activities) were name games. After a couple of energizers (little games, songs, rhymes etc. to get us excited and ‘energized’ for the next activity) we did the first name game. This involved in us firstly getting into a circle saying our name and then everybody had to shout it back. It was fun and very loud! Afterwards we played a name game called the blanket-name-game where the group is divided into two groups and then we send someone behind a raised up blanket. When the blanket drops you had to say the other person opposite to you name. Next, we then drew our placemats with some very funny outcomes. Eventually the younger group went to put on their pyjamas and brush their teeth so they could sing lullabies. At lullabies (songs we sing to get us in a relaxed state just before bed) we sang songs and then the younger group went to bed ready for a full on day on Saturday.

The JB then had their night activity run by Georgia. This was everybody’s favourite game, Mafia. This involves the Junior Branch, JB, being in a group and we were all given cards telling us if we were a villager, a mafia, a detective and an angel. The aim of the game is for the group to vote who the mafia is. The two mafia “wake up” (meaning everyone is heads down and “asleep”) and between the two decide to kill someone. The mafia go to sleep and the detective wakes up and then tries to guess who the mafia is the narrator (the one who is no persona and tells the story) will either confirm or deny. Then the angel wakes up and has to guess and save somebody random, if they are lucky, the person is saved. The whole group is then woken up as the events are recited by the narrator. Afterwards the group has to vote who to suspect and kill in hope that they kill the mafia. The game was over as the first round both mafia were caught but in the second round mafia killed everybody and won the game. Everybody was sleepy and tired so went off to bed.

The next morning everybody woke up for flag and then a nice breakfast of toast and cereal. After Kiitos (a song we sing in Scandinavian languages to thank the cooks for making us our food), duties and dishes the JB were educated about CISV in Gemma’s fantastic training as we learnt about the structure of CISV and its general purpose of the organisation as well as history of the CISV. It wasn’t all history as we did a questionnaire round where we had to suck water into a long straw and transport it into a cup the first person from the two teams to fill up the cups won the question.

The littlies (9-13 year olds) in the meantime, gathered for activity on the field. We were lucky with a sunny morning, so we ran around playing games such as the camp favourite, Never- ending Tiggie.

After a break of morning, tea, the Juniors gathered for activity two, which was about team work and communication. Broken up into teams, the kids traveled around to stations run by each of the leaders. Each station required the team to communicate effectively and work together to reach a goal; this could be figuring out a puzzle without speaking, or travelling from one place to another with only a certain amount of hands or feet allowed to touch the floor. As the teams travelled though the stations they grew more able to work together. The activity ended with a discussion about effective team work, with a focus on different kids of teams (some examples participants came up with was a team working on a construction site, a family, or CISVers as a whole).

Post morning tea, the JB activity was organised by Noah. This activity was about the U.N and was a simulation activity. Everybody was given a different country. They were then given cards telling them about their political, social and economic interests and detriments. Then they were given situations that the countries had to argue and come up with solutions as all country wanted what was best for there’s. But, there were 5 countries (China, USA, UK, Russia and France) that, like in the real U.N had “Veto power” and they could turn any decision they would like. We then all discussed if this was the fairest way to do things and how we could bring diverse ideas together to bring about the best outcome.

After Noah’s activity the camp sat down and had a delicious lunch of mini pizzas. Delicious! The JB then had Zoe and Ellie’s activity. This was an activity that involved the JB writing letters about ourselves to Indonesian school children the aim was to sow them about what we do so they had more of a multicultural view on the world. We also made videos advertising CISV that will be out soon!

Afterwards we had another snack and we then had a good long evaluation. This is when the JB reflected on the past year of all things that went well and all things that could be improved. This overall made a pretty hefty list so that the JB can improve and expand for next year.
After the yummy lunch the Juniors gathered for activity 3. In this activity we worked in teams to create our own team chant, handshake, poster, and dress up a leader as our team mascot.
For activity four the Juniors searched around the campsite for puzzle pieces, making puzzles which taught us about the wonders of bees. From this we had a discussion sharing the opportunities we have to help out other people, such as participating in school mufti days raising awareness for different causes.
Dinner was a delicious meal of chicken, pasta and coleslaw and then a crunchy homemade-apple crumble with ice cream. Our favourite! After Kiitos it was then a CISV traditional Saturday night, skits! This was planned by the delegation going away to Christchurch for a Step-Up programme at the end of the year. This was we were split into groups and we were given an object and we had to come up with a situation that the object caused a problem at a concert. We were then given another groups object and situation then given the singers concert that it had to be in and had to go make a skit in 15 minutes. The outcome was hilarious and some of the best that we’ve seen in years.

We all then had supper as the Junior group went afterwards and brushed their teeth and got into their pyjamas as we all sang lullabies and the CISV song just before they went to bed. The JB stayed up and then played a game with multiple names. It’s sometimes described as the apple game. This involves in the JB being in a tight circle with hands behind their backs and then having an apple on the outside circulating and being passed around the outside of the circle while there is a person in the middle trying to guess who’s in possession of the apple. Oh and did I mention it was in pitch black? The game was won when the apple had been bitten right through to the core. It was a nice funny game to do just before we went to bed.

In the morning, we all got up and had flag. We then had a breakfast of leftover dinner and dessert, toast and cereal and then had Kiitos. We all then went and cleaned up our rooms and met on the field for a final activity. After some energizers we played a game of cops and robbers. This is when there is one team as cops and the other as robbers. The robbers try to get money from one side of the field to another by running and hiding it somewhere on there body. If they are tagged in the opposite teams half then they are questioned by the cops and they get 3 guesses at where they hid it on their body, if they get it right the cops collect the money, if they get it wrong the robbers can continue on their journey to the other end where someone collected the money. After 15 minutes of the robbers trying to sneak money it was then the cops turn to be the robbers. There was a clear winner as we then afterwards had our final morning tea. After a final flag time with all the parents and caregivers everybody went home.

What a fun, successful minicamp it was!

[…] HERE to see the report from the September Mini […]